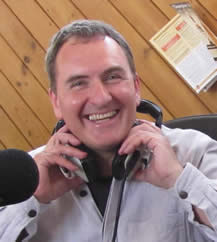 Peter grew up on a farm at the edge of a small village in Buckinghamshire.  Adjacent to the farm was Grendon Prison which due to its rural setting had an estate housing the prison officers and their families.  Becoming friends with the sons and daughters of the officers Peter experienced what it was like to be part of a thriving dynamic community made up of people from all over the country.  His close friends included Geordies, Scousers, and Yorkies.

Peter trained as a primary school teacher.  His specialist subject was PE with Environmental Studies as his second subject.  It was while teaching that Peter saw the importance of building strong bonds within the community; whether this was with parents transporting children to sports matches, whole families becoming involved with helping build wildlife areas within the school grounds or working with parents to take underprivileged children away for a week so that they could have a holiday during the school summer holidays.

Peter planned to teach for his whole working life but the consequences of contracting pneumonia meant he was advised to retire from teaching in the late 1990’s.  For a couple of years, he took up again another of his loves, landscape design and gardening which he used to use to pay his way during his years of travelling abroad.   (During those years of travelling Peter had again experienced the positive aspects of a strong community bond when he used to spend time living on a kibbutz during the winter months before getting back on the road again in the Springtime.)

In the late 1990’s and early 2000’s people had begun to show an interest in learning about meditation from Peter.  Something he had been doing since his mid-teens; so he stopped his landscape work and began teaching meditation classes in the mid-Warwickshire area which he now does full time.  Peter has been practicing meditation now for almost 50 years; one day he’s hoping he’ll become proficient at it.

It was while teaching meditation at Lifeways Therapy Centre in Stratford that Peter got to know Val Rainbow.  A number of years later she asked him if she could interview him on a radio programme she had just started on the Stratford Community Radio station which had started at the beginning of that year.  Several weeks later Val asked him if he would join her on the programme as co-presenter.  During the years that followed while doing their programme, The Alternative Show, that he experienced a rekindling of the community spirit from his teaching days.  This was reinforced when the Stratford River Festival started up again and for three years he and Marion Fleetwood organised the Family Zone section of the festival.

Unfortunately, the Stratford Community Radio station closed down; although Peter will always be grateful for the opportunity that Adrian Styles, who owned the station, had enabled Val and Peter to develop their show.   With the help of Sam, the technician from the station, they continued to broadcast their show on the internet.  Their programme, The Alternative Show had brought them into contact with so many people doing amazing things in the Stratford area.  Lots and lots of people quietly, and not so quietly, getting on helping people, often unrecognised yet always passionate about what they were doing.  With all these marvellous things happening in Stratford they pondered about setting up a new community radio station for Stratford to help such people’s message reach a wider audience.   A conversation with James Pavitt the manager of Lifeways one day acted as a catalyst for them to get the project going and now …….. it’s happening!

Peter has absolutely no training in radio, technical or otherwise.  However, being a primary school teacher taught him to always be open and willing to learn.  He never ever had a single thought of being involved with radio until that day Val phoned up.  His meditation work was his focus in which he delves into subjects such as neuroscience and human evolutionary biology.  He has learned from them that humans are designed to work and play together.  In his meditation classes, he quotes the work of Professor Daniel Lieberman who describes how the earliest hunter-gatherers 2.6 million years ago survived and evolved because, “hunting and gathering also requires intensive levels of cooperation.”  He explains, how they survived because they learned how to get on together, how to help each other; how basically, our species exists because our ancient ancestors developed cultures which were egalitarian in nature.

In lots of different ways over the years Peter has experienced examples that show that 2.6 million years later such egalitarian behaviours are still hard-wired into us.   For him, Welcome Radio is an expression of that hard-wiring.  Its why he feels that that natural egalitarian predisposition should lie at the very core of the station, its ethos.