The Mencap Radio Show is an original, quirky view on life by the customers and staff of Heart of England Mencap. Val, Karl, Charlie and Anna present a newsy, chatty show with special features created by customers, such as The Weather Report, Food Glorious Food, Sir Sort-It, and Walk and Talk, and also interviews and news about the work of the organisation. The show is created, compiled, edited and presented entirely by staff and customers from Heart of England Mencap.

The aim of the show is to provide our customers a place to air their views on life and to promote awareness of the work of Heart of England Mencap to friends, family, the general public and the world! 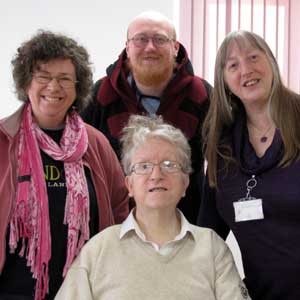 Formerly an arts graduate Val has had an eclectic career path, from theatrical costumier, fancy dress business owner, care worker, mime clown and belly dancer through to her current job at Heart of England Mencap. She has had several years’ experience as a presenter on Stratford Community Radio, North Cotswold Community Radio and The Alternative Show and is delighted to be back behind the mike with The Mencap Radio Show.

Anna, who is married with 2 kids, is from a local Stratford family and went to Wroxall Abbey school. She completed a Duke of Edinburgh Award scheme before commencing her career in care, and has since worked with adults with learning difficulties for over 20 years. She has worked for Mencap since 2002 and Pathway Day Service for 5 years. Now an activities assistant with Heart of England Mencap she is enjoying her first time as a radio presenter.

Charlie is a talented musician and costume/prop maker who originally attended Hereward College where he studied performing arts and music. He also studied music in Leamington Spa to National Diploma level and has taught music and creative writing. Now our technical whizz kid who sorts out any complicated computer problems and irons out the mistakes we make in the studio!

Originally from Moreton in Marsh, Karl went to The Lambert School in Stratford. He has previous experience as a radio presenter at Warwick Hospital and is now finding his niche as Sir Sort-It on The Mencap Radio Show. He is a keen knitter and problem solver. 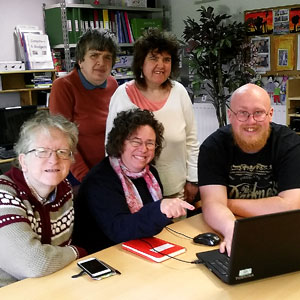