Home / Where Are The Songs We Used To Sing?

The Songs We Used To Sing

The music for Where are the songs we used to sing? is chosen from Chris Wall's collection of 78rpm records.

Chris owns a large collection of 78rpm records and part owns a similar collection with a friend, about 12,000 in all..The songs played on the show are recorded directly from the original records.

Chris has lived in Stratford for thirty two years. He has collected 78 rpm records made of shellac since the age of five. His interest first began when his father returned home from work one day with a wind up gramophone and a collection of records.

His real interest in popular music (from 1900 to 1959) relates to an experience Chris had on a train as it pulled out of Leamington Spa station. One of the big local events in Warwickshire was to see the Leamington Spa lights (a bit like Blackpool lights but smaller). On the return journey home, a crowd of elderly ladies boarded the train and instantly went in to song and dance mode, singing the songs of their earlier years. To Chris, then aged six, instead of enjoying the music he was hearing he felt that although it was jolly, there was an air of sadness about the way the ladies sang. At that tender age how was he to know that they were singing the songs that had helped them through two world wars? Shortly after this, Chris had a strange dream in which he dreamt that he stood on a railway station with a wind up gramophone and records and was off to entertain.

Forty five years later Chris found himself on Coventry Railway Station complete with Gramophone and records, booked to perform for elderly people! As a result of being semi-blinded whilst a security officer, he spent time at the Royal National Institute for the Blind, Torquay. Needing to change his way of life, with the backing of the Institute, he ventured into the entertainment world.

Chris spent many years touring the UK known as the Gramophone Man, his audience being those that successfully brought us through the Second World War. The pinnacle of Chris’s fame was appearing on the same bill as The Glenn Miller Orchestra (Ray Mc Vay). Chris has been asked to comment on TV news broadcasts on various music related topics. This and other newspaper coverage has made Chris well known for his knowledge of early twentieth century popular music.

Chris owns a large collection of 78rpm records and part owns a similar collection with a friend, about 12,000 in all.

The music for Chris’s programme, “Where are the songs we used to sing”, are chosen from this collection and recorded directly from the original records.

Chris’s Technical support for the programme is Penny Keynton-Hook, another volunteer member of Welcombe Radio 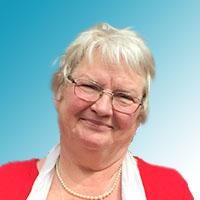 Music and drama have played an important part in my life from before school age. Both my parents enjoyed music and it filled the house all my time at home. This included our father playing classical music to our cows. The music from the decades, fifties, sixties and on were all appreciated including big bands, classical  and pop were all enjoyed. This included singing in schools choir and later the ‘Vauxhall Motors’ choir where we visited Care Homes and sang in long pink dresses to the residents. Driving round to my patients as a District Nurse allowed me to listen to a varied musical feast. I also enjoyed amateur dramatics, especially behind the scenes with props and as a director.

Since retiring and moving to Stratford, I have joined the Rise and Shiners acapella singers, which is so enjoyable with lovely people.

I am honoured to support Chris with his programme, ‘Where are the Songs we Sung’.  It is great fun and I am learning so much about early nineteenth century music especially its history and the artists.